Time To Celebrate: The Parable of the Prodigal Son

I grew up hearing the story Jesus tells in Luke 15:11-32 spoken of as The Parable of the Prodigal Son.* It’s a wonderful story that has everything to do with the grace of God. It reemphasizes the mercy and compassion of God, who is patient and full of steadfast love. 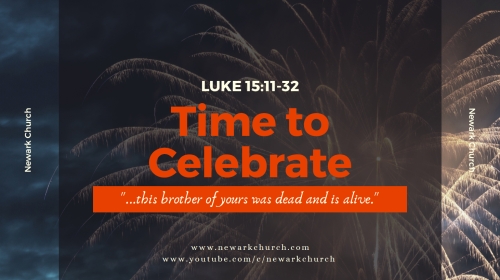 Whenever I read this story, I recall the late Neal Pryor. He was a preacher and Bible professor at my alma mater Harding University. I think of him because I can remember listening to him preach this parable to an auditorium full of college students. About twenty-five minutes later I saw numerous college students  lining up to confess their faith in Christ and give their lives to him in baptism.

That’s the way the grace of God surprises us sometimes. People, in this case, students, who seem to have their lives all together but know that underneath the masks and veneer they put on, their lost in sin. But when they hear about the mercy and love of God, they come to life as they put their faith in Christ.

Yet when reading a story like this parable of the prodigal son, it seems that the story Jesus is telling is quite provocative regarding the grace and mercy of God. To hear the provocation, we have to hear the story within the larger story the Gospel of Luke is telling.

At the beginning of chapter fifteen, we read how “All the tax collectors and sinners were gathering around Jesus to listen to him. The Pharisees and legal experts were grumbling, saying, ‘This man welcomes sinners and eats with them” (Lk 15:1-2).

Apparently, the gatekeepers of the faith missed some Sunday school lessons on the prophet Isaiah as well as Elijah and Elisha. That’s because in Luke 4, Jesus enters the synagogue and reads from the prophet Isaiah. In doing so, he declares himself as the fulfillment of this good news for the poor that is freedom for the prisoners, sight for the blind, and liberation for the oppressed because now is the time of God’s favor (cf. Lk 4:18-21). In proclaiming this good news, Jesus also associated himself with the prophets Elijah and Elisha, who were sent not to Israel but to a widow and Gentile.

Failing to understand this, the Pharisees and lawyers are displeased to see Jesus  hamming it up with the sinners and tax collectors. Responding to his critics, Jesus begins a little tale about a lost sheep and lost coin. Things anyone can relate to. At least, I can. I mean if the TV remote goes missing at my house, there’s a mini crisis on hand and heaven forbid if we misplace our iPhone’s.

Somehow though when it comes to people, especially “the tax collectors and sinners,” whoever they may be, the concern is usually a measure of judgment and condemnation. Especially the people who can’t cover up the shame of their sin the way most can do with their sins.

Now these stories Jesus is telling about the lost sheep and lost coin are beginning to make some sense but he doesn’t stop there. Jesus continues on telling a story about a father and his two sons. The younger son takes his inheritance and runs away with it until he squanders it through his “extravagant living” or “dissolute living” (NRSV). After squandering his inheritance, the younger son finds himself at the bottom of the barrel with no place to go except back home to his father.

Then there’s the older brother, who I like to think of as the pouting brother. He’s not too happy to hear about his younger brother’s return. In fact, he’s miffed that his father would welcome back this rebellious brother so easily with nothing but a big homecoming party. Exasperated, the older brother says to his father “…I never disobeyed your instructions.” His attitude (self-righteous?) has blinded him from seeing that what was a terrible loss has now become a great reunion.

“The grace of God isn’t just for those who think they are God’s elect but for the rest of us too because the election of God is his desire that we all would come home as recipients of his grace extended to us in Christ.”

That’s the story Jesus is telling to a bunch of Jewish Pharisees and lawyers who are bothered by Jesus spending his time with the sinners and tax-collectors. That’s the larger story which is really about Israel and the Gentiles. In our day, we might say the church folk, perhaps self-righteous church folk, and any number of unbelievers who never ever think about coming to a church service.

The cool thing about the story Jesus is telling is that the younger son thinks he’ll go back to his father except… As Jesus tells the story, the father was already looking for his lost son and when he saw him off in the distance, the father “was moved with compassion.”

Borrowing the langue of the apostle Paul, we Christians sometimes speak of people being dead in sin (cf. Eph 2:1, 5). However, the story Jesus tells should keep us from pressing the metaphor too far because though that is true in a sense, it can’t mean that we literally dead to God. Even when feeling as though we’re drowning in the deepest and most shameful pits of sin, God still knows us. Not only does God still know us but moved by compassion, God is looking for us so that he can lead us home.

A few years back in Chicago, I was sitting with a few pastor friends in the outside patio of a bar. As our waitress, Brittany, was taking orders, it was obvious that she was very pregnant. So to make small talk, I asked her if she was having a boy or girl. The baby was a boy and she planned to name him Brian, named after her brother who died from leukemia a few years prior.

Well as it turned out, this was Brittany’s last day of work before she went on maternity leave and in the small talk conversation, she learned that everyone at our table was a bunch of pastors sitting at a bar. That kind of took her back for a second and then she looked at the all black outfit she had on as she said, “Don’t think because I’m dressed in all black that I’m some kind of satanist or something. My boyfriend and I have actually thought about finding a church so that we can raise our son right.”

Now being that this was a Thursday evening and we were all planning to fly back to our homes on Friday, the most we could do was get her contact information and pass it along to a local pastor we knew. But don’t miss the fact that here was a young woman looking for God and I like to believe that God was using us pastors siting in that bar to begin showing Brittany that God is looking for her too.

So back to the story Jesus is telling. The father explains to his angry older son how, “we had to celebrate and be glad because this brother of yours was dead and is alive. He was lost and is found.” No scolding, shaming, or making the younger son beg for mercy, just a big welcome and party to celebrate the younger son coming home.

The grace of God is that great. No matter the sin and no matter how far down in the pits of sin we climb, the door is open for us to come home. When it comes to salvation, what God has predetermined is the extension of his grace to us in Christ. It’s a standing invitation for all, just as it was for the Gentiles. To say it another way, the grace of God isn’t just for those who think they are God’s elect but for the rest of us too because the election of God is his desire that we all would come home as recipients of his grace extended to us in Christ.

That’s why Jesus tells us a story like this parable of the prodigal son. It’s because the grace of God is for everyone and when God finds his lost children, it’s not a time for judgment or heaping on a bunch of shame; it’s time for a celebration.

May the grace of our Lord, Jesus Christ, and the love of our God, and the fellowship of the Holy Spirit be with us all!

* This is a modified manuscript of the message I preached last Sunday to the Newark Church, whom I serve with as the Lead Pastor. You can also watch a video recording of the actual message on the Newark Church Youtube Channel, just click here.