How Shall We Christians Respond?

As the length of the Covid-19 Coronavirus pandemic wears on, the endurance of society is challenged. Besides the number of deaths in the US alone, getting closer to 50,000, numerous other people are ill while others are out of work and many businesses are shut down, facing an uncertain future. Of course, I’ve not said anything you don’t know already. 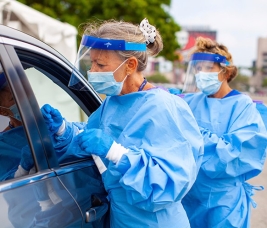 What this pandemic has also done is bring out the best in some people and the worst in others. In the first picture are two nurses serving on the front line of this battle. We all know by now that medical personnel have worked tirelessly and under great duress to serve, caring especially for the sick. Their compassionate service is worthy of our commendation. Then the other picture is a woman protesting the shut down in the state of Tennessee. Her sign reads “Sacrifice the Weak/Re-Open TN” (ironically as she wears a face mask). She is essentially suggesting that if reopening the economy means letting more people become sick and possibly die, then so be it. Her mentality deserves our condemnation.

The pictures above illustrate how the best and worst are revealed in difficult seasons of life. For some, tragedy and disasters result in love that is embodied in acts of compassion, mercy, and service. For others, the result is hate cloaked in selfish desires and appalling attitudes.

But what about those of us who profess the Christian faith, who claim to follow Jesus Christ? While the example of Christ should spur us to acts of love, we are still sinners and so we are capable of acting with hatred. If you doubt that, just open a history book where there are plenty of examples. The answer to the question depends on how we are formed as Christians.

“My little children, I’m going through labor pains again until Christ is formed in you.” ~ Galatians 4:19

The Bible verse above, written by the apostle Paul, is one of the classic passage of scripture cited when talking about spiritual formation. While Paul was addressing a very different problem with the Galatians that what I’m writing about in this post, the point is that we embrace the name Christian are to have the way of Christ formed in us. Elsewhere, Paul spoke about such formation as transformation into the image of Christ (2 Cor 3:18) and being conformed his image (Rom 8:29).

I don’t have any clue about what those two nurses or the protester in the pictures above claim as their religious beliefs. My concern is with us who profess to be Christians, which is a claim to live as followers of Jesus. This pandemic will reveal whether it is Christ or the world (particularly partisan politics) being formed in us.

We just went through Holy Week, remembering the passion of Jesus Christ and yet I’m not sure we see the implications of his crucifixion and resurrection. On the cross is the One who humbled himself by giving up his very own life upon the cross for the sake of others, including the “weak.” If his way of life and example does not become ours, we have made sacrelige of his death, burial, and resurrection and we continue to do so every time we take the bread and wine in remembrance of him.

Everyone of us will have different opportunities before us in our own local communities. Opportunities to serve others or serve ourselves. I certainly hope we’ll choose the former, as we follow Jesus in giving up our needs for the sake of loving others. The choice we make is our witness as Christians and it will either bear witness to the good news of Jesus Christ or it will make a mockery of his name.

Let’s choose wisely and faithfully, for the world around us is watching!

Like others, I am tired of turning on the news only to hear that another mass-shooting has occurred. With the most recent shootings in El Paso, Texas and Dayton, Ohio taking place within twenty-four hours of each other, it seems as if such violence has become an epidemic. Maybe that’s more perception than reality but nonetheless what is reality is the fact that more innocent lives were harmed and killed.

It is beyond me to understand how anyone could so maliciously plot and carry out a deadly attack on other people. Yes, I am aware of the anger and extremism, the hatred and racism, the mental health and emotional trauma, and the many other factors that come into play, including the easy access to certain firearms — assault weapons designed simply to kill with efficiency. I’m frustrated that elected officials just keep offering their “thoughts and prayers” without undertaking any reasonable solutions. I’m frustrated that, fifty-one years after the assassination of Martin Luther King Jr., racism still has a grip on America and my frustration doesn’t end there. As a White person, I am also frustrated with many White people who either don’t seem to care about racism or seek to downplay it and even want to disassociate from the racism (a White privilege), failing to see how systematic racism still exists even if they don’t personally discriminate against any person of color. And if the truth be told, maybe I have been one of those White people too. I try not to be but I am a sinner too.

So what can I do?

What can we do?

As followers of Jesus, what must we do?

I know, I know… It sounds simple and even trite because for far too long “church” has been nothing but a place where people gather on Sundays. Our traditional understanding of Church in the west has often become an impotent caricature of the ekklēsia that Jesus called us to be as his followers. It’s the reason why many of the Sunday parishioners “go to church” and then leave an hour later as the same people they were before and as the same people they were when they first started going to church many years ago. Let’s be honest, this understanding of church is a place for people to sing songs about Jesus, hear a message about Jesus, and pray but not necessarily follow Jesus. I’m not against singing, preaching, and praying but such worship loses its way when those gathering for “church” leave only to sound more like an echo-chamber of whatever news-pundit they listen too as they continue pursuing a life shaped more by their own individualistic desires.

But that is not what I mean when I say “Be the church!” What I mean is hopefully a little more profound because it is about following Jesus and serving as a living embodiment of the gospel Jesus proclaimed. That means living as a people who gather, in the name of Jesus and by the power of the Spirit, with others, including people of other colors, nationalities, social-political viewpoints than our own. As we gather together, we do so as people learning to be practitioners of the Jesus way (discipleship) in which we embrace each other with love. This is a love that is full of the grace and truth that opens space for us to confront our sin with repentance and forgiveness so that we all may journey forward as reconciled brothers and sisters. This love is a fellowship in Christ that we have pledged ourselves to in baptism and that we continuously acknowledge together in the Eucharist. This vision of church, which Jesus has called us to be, is one that bears witness to an alternative kingdom — the reign of God — and becomes the beacon of light in a society shrouded in darkness.

Pastors, the best response to a society boiling over with hatred and violence is for you to cultivate a living embodiment of the gospel among the church you serve so that there will be a community bearing witness to the way of peace in Christ. ‬

This kind of church doesn’t effect change like a tsunami crashing upon the shore. Rather, it is a patient approach that doesn’t force its way of life on others but becomes such a beautiful portrait that others are captivated by it and want to become a part of this life. It is a life that flows from the prayers of those who are committed to living. So I leave us with the Peace Prayer attributed to Saint Francis of Assisi…

O divine Master, grant that I may not so much seek
to be consoled as to console,
to be understood as to understand,
to be loved as to love.
For it is in giving that we receive,
it is in pardoning that we are pardoned,
and it is in dying that we are born to eternal life.
Amen.