Remembering Kenny: God, Where Were You?

In yesterday’s post, The Joy of My Son’s Life, I recalled the life that Kenny did live, sharing some of the great memories I have of his life.  With this post I want to share the dark and difficult part of the story, Kenny’s death. 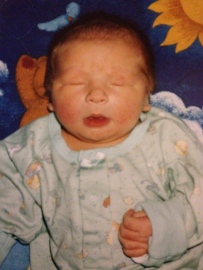 The day was Friday, August 2, 2002.  Laura and I brought Kenny home believing he was as healthy as a healthy baby could be.  Obviously that was not the case.  About an hour later Kenny suddenly stopped breathing.  911 was called and EMS came, taking Kenny immediately to a local trauma center.  Laura and I quickly followed and were eventually joined at the trauma center by many friends, who all were praying for Kenny.

Then, about an hour later, after exhausting every means to resuscitate Kenny with no avail, out came the doctor.  His words were shattering.  I remember them like they were yesterday.  “I’m sorry, we have pronounced your son dead.”

And with those eight simple words, a darkness came over me that would remain for nearly a year and a half.

The doctors did allow Laura and I to come in and hold our son, or his body, one last time.  Laura did not stay long but I couldn’t leave.  My son was gone.  And all of those prayers…where did they go.  Where was God when my son was dying?  How can this be happening?  Is this really happening?

I never doubted the existence of God and as strange as it may sound, seeing my son’s lifeless body only enhance my belief in God’s existence.  You see, life is not simply a matter of biology.  While all people are physical specimens, we all have an “image” which makes us uniquely human with all of our beauty and goodness as God’s creation.  That was gone, missing from my son’s lifeless body.  Did that just appear by accident or was it the image of God, created by God?

I was convinced that Kenny’s life – from the miracle of his birth (all births are miracles, are they not?) to the beauty that made him uniquely Kenny, that gave him glory and honor (cf. Ps 8:5) – was evidence of God’s existence.  But where was God when we needed him the most, when Kenny needed him the most?

That first night after Kenny’s death, I was awakened from my sleep due to my crying.  The anguish was so great that my stomach began to crap up as though it was being tied into knots and I had trouble catching my breath.  I remember asking “why?” when my son was so innocent…he didn’t deserve this.

The question of why began haunting me.  What happened to all of those prayer’s for Kenny that Laura and I and many other had prayed?  Did God hear them?  Did they matter to God?  Such questions crippled my faith because I could not resolve the tension that these unanswered questions left with all of my grief and pain.

It was difficult to carry on while trying to believe that there was any reason to have hope.  Yet to remain in that place of such darkness was to accept that life was hopeless and that seemed even more unbearable.

In tomorrow’s post I will share how discovered hope and had my faith renewed.  But for now, I want to recognize the importance of this place in the journey.  It has been ten years since Kenny’s death and I still do not have the answer to many of my “why” questions.  That is, I don’t know why Kenny died, just as I don’t know why suffering exists (and I’m skeptical of those who so easily claim to know).  However, when people endure such tragedies, this stepping into the darkness with the deep questions of faith is so necessary and acceptable if we are to discover faith and hope again.  For in between that Friday when Jesus was crucified and that Easter Sunday when he was resurrected is a very long and dark  Saturday, when the prayer of “My God, My God, why have you forsaken me?” (Ps 22:1; Mk 15:34) is met with the silence of God.

In that moment, I had to step forward in trying to find God in all of this.  I was scared as I did not want to lose my faith and yet I felt like I had very little faith. Even worse, the more I stepped forward the more the haunting the darkness seemed as the questions came with me.  However, in looking back ten years afterwards, I can say that when in darkness , if we will have the faith to step into that darkness then we will reach that place where the darkness gives way to The Light.

This video is of the song “Can You Here Me?” by Mark Schultz.  Although the song was written about a mother and father who’s child was sick with cancer, the song captures exactly how I felt after Kenny’s death.

See also part 1 and 3 of this “Remembering Kenny” trilogy:

6 responses to “Remembering Kenny: God, Where Were You?”